In general, ride in clothes you feel comfortable in.  In an earlier post I included a photo of me riding Prim on the trail.  I think it was taken for the paperback edition of The Beginning Dressage Book (published by Lyons Press in 2003), and I was supposed to look neatly turned-out, as though I were competing in a schooling show.  But except for the white button-down shirt, the rest of what I’m wearing would not be out of place on a trail ride, since I use my old Passier dressage saddle and often wear my tall boots.  (Have I mentioned I’m a leather boot fanatic?) 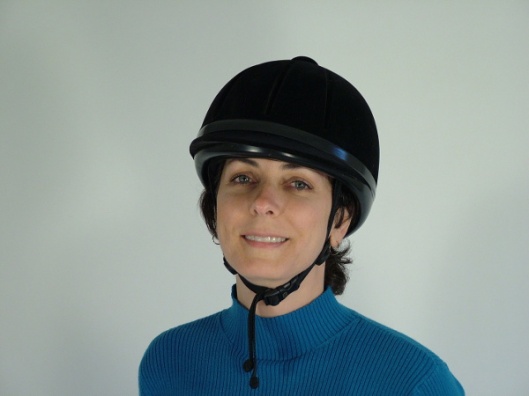 You should wear a helmet, even though they’re uncomfortable, particularly in hot weather.  One reason there are so many headless riders in the paperback edition of the Dressage Book is because the original hard-cover was published in the Dark Ages (1981), when nobody wore safety helmets.  I had to re-shoot some of the photos in order to show riders with heads and safety helmets.  I think that’s when I first started wearing that little black helmet that’s pretending to be a hunt cap.  When I went trail riding with friends a couple of months ago, I noticed that I and another rider about my age were the only ones wearing helmets.  The two younger women went without, and I envied them.

What I learned only recently is that if you fall hard enough, you can get a concussion even if you don’t hit your head.  The impact can still reposition your brain inside your skull.  If you black out—can’t remember getting back on the horse, or suddenly discover that you’re walking home in your riding clothes—please get yourself to emergency.  If you can’t do that, call 911.  Much as I don’t like them, if I do get thrown, I’d rather be wearing one than not.

If I were still riding Western, I would also wear a shirt I can pull over my head for the same reason—safety.  The horn of a Western saddle comes in handy, even if you don’t rope cattle, but it can also be a menace.  Years ago, a friend of mine was riding a colt for the first time in a bull-pen, which is a round pen except the walls are solid and the entire structure is at least six feet high, so the horse can’t look out and get distracted.  My friend wanted to start the colt Western, but it was summer and she wore a sleeveless blouse that buttoned down the front.  All went well until she asked the colt to canter.  He did, but like many young horses he jumped into it, humped his back, and threw in a little buck.  But that was enough to make her lean forward to maintain her balance—and then she couldn’t straighten up again.  She was, somehow, connected to the saddle horn.

The colt didn’t like the feeling her being off-balance on his back and started bucking for real, trying to get rid of her.  But she hung on until he got tired and dropped down into a trot.  Only then did she figure out what had happened.  One of the buttons on her blouse had popped open, and when she leaned forward, she snagged her bra on the saddle horn.  She was black and blue for weeks.

In general—especially if you ride Western—I’m not in favor of any clothing that can get caught on your horse’s tack.  This includes “reins” that are really a single lead rope with snaps on both ends that attach to the bit.  What happens if the horse spooks, the reins fly over his head, and he steps on them?   I would never ride on the trail wearing tennis shoes because it’s too easy for my foot to slide completely through the stirrup iron.  Riding barefoot is simply asking for trouble.  Knee-high leather boots aren’t for everybody, and I never wear them in the summer.  I wear zip-up jod boots, instead.

Pants matter too, because I can tell you from experience that if they’re loose enough to crease and ride up, I’m going to get the worst case of road rash I ever had.  That’s why English riding breeches are always stretchy.  They’re supposed to cling to your lower body like a second skin!

If you make sure your clothes fit properly, are clean, comfortable, and don’t irritate your horse, you should have a wonderful ride.

2 thoughts on “What Should You Wear on a Trail Ride?”