Horses love to run, and one of the best things you can do for your horse every once in a while is—let him run.  Whether you keep some control of him (a good idea, in most cases), or just turn him loose (galloping uphill is much safer because it allows you to take back control at any time), is between you and your horse.  Do you think he’ll stop, or do you know he’ll stop?  Since I knew Prim would always stop, I occasionally turned her loose, but only if we were going uphill, the footing was good (packed dirt can be as hard on your horse’s feet as concrete), and we were heading away from home.  There’s no feeling quite like it in the world.  Freedom, exhilaration, speed, and an almost electrical bond between two species who—for as long as the moment lasts—share the same goal:  run as fast as you can.

Notice that Prim’s hind legs are almost vertical while her hind pasterns (as opposed to her pasterns in front) are almost horizontal. (Photo by Joan Fry)

END_OF_DOCUMENT_TOKEN_TO_BE_REPLACED

Although these may not be the first questions you think of when you decide to buy a horse and keep him in your backyard, you need to think about them now, before you buy the  horse.  The real first questions are, what’s the best, most efficient way to clean your horse’s stall or pipe corral, and where do you dispose of the waste? 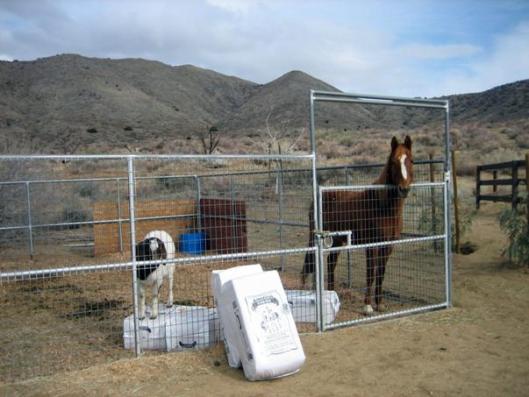 One of Prim’s first roommates–a goat named Franklin. The corral is 24′ x 24′ and bedded in shavings. (Photo by Joan Fry)

END_OF_DOCUMENT_TOKEN_TO_BE_REPLACED

Breakaway halters are useful if you have a horse that has to wear a halter all the time.   The most common reason is because the horse bites.  If he’s already haltered, you can snap a leadrope directly to the halter while standing at his shoulder, where you can deflect a nip.   I also use a breakaway halter on Prim, my old mare with the dropped fetlocks, when I turn her out to self-exercise.  (She never lets Gunsmoke out of her sight, which is the reason I turn him out in the arena first.)  When I let go of her leadrope (a very short one, called a “catch rope”) and cluck, she gallops towards him and they circle the arena a couple of times, Gunner on the inside, Prim on the outside.  It’s short, so she can’t step on it and trip, or get it snagged on something.   Even if she did manage to do that, her breakaway halter would do its job and break.  Unlike Gunner, she doesn’t wear it all the time—just when I turn her out.

END_OF_DOCUMENT_TOKEN_TO_BE_REPLACED

A forgiving horse is one that, for example, sees a raven fly out of a bush right in front of him, gets frightened, and shies.  But instead of staying scared and running back home, out of control, your horse forgets about the raven and remembers that you taught him to obey you instead of his natural instincts.  He’s willing to put his trust in you again.  But there’s another kind of forgiving horse.  This horse has often been unfairly reprimanded or mistreated, usually because of ignorance on his owner’s part—and he forgives her for it.

Hand-feeding a horse that bites, or threatens to bite: Not smart. (Photo by Andrea.)

END_OF_DOCUMENT_TOKEN_TO_BE_REPLACED

The flimsy leather crownpiece of this halter means the halter will break if your horse gets himself hung up on something. (Photo by Charles Hood)

The cat who nips at your hand is similar to the horse who nips at (air bites) your hand, and you can use the same methods to stop the behavior.  Keep your hands away from his face; never allow him to play with your hands; and never, ever, physically punish him.

END_OF_DOCUMENT_TOKEN_TO_BE_REPLACED

I once owned an orange kitten who liked to bite my hand.  He would be lying in my lap, purring as I petted him, and then—for no reason at all—he’d turn his head and bite me. I’ve owned cats off and on most of my life, but Gibson was the only one that bit me.  He was also the only male I’d ever known.  Were they love bites—a blend of affection, enthusiasm, and testosterone?  Maybe, but I’d been to urgent care once from an infected cat bite, so I flicked my finger against his nose.  He stopped and drew back, ears flattened.  This small, supercharged kitten taught me that physically reprimanding an animal can backfire. 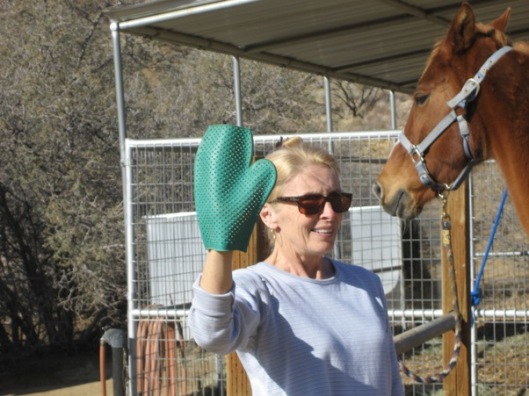 I’m introducing Prim to a rubber curry mitt. She’s excitable and has never bitten anything except her food. Gunner is curious and mouthy. I stand much farther away from him when I introduce him to anything new, so he can sniff it but not grab it.

END_OF_DOCUMENT_TOKEN_TO_BE_REPLACED

In some parts of the country it’s still below freezing.  But here in the high desert, in a single week we went from snow to 90 degree weather.  While that’s not exactly summer (summer is 110 degrees), it’s definitely trail riding weather.

There’s been a lot in the news recently about trail safety, and I’m not sure why.  Maybe it’s because so many backyard horse owners have taken up riding as a hobby in their later years.  Maybe it’s because so much of the empty land we could ride in has turned into housing developments, and the only trails available to us are now designated “mixed use,” which means we have to share them—usually with hikers and bicyclists, but all too often with arrogant off-road bikers or quad drivers who don’t care if they spook your horse or not.  Maybe it’s all of those things.  But the bottom line is the same: it’s harder to stay safe on a trail ride than it used to be. 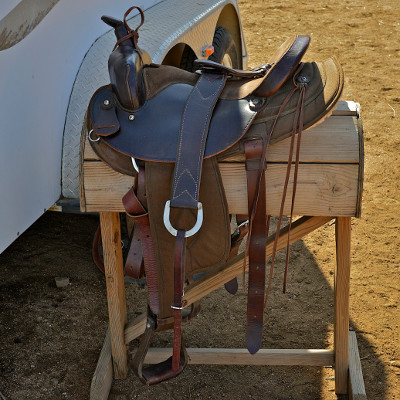 Western saddles have a multitude of straps and strings and metal rings that makes it easy to carry canteens and other items. Photo by Charles Hood.

END_OF_DOCUMENT_TOKEN_TO_BE_REPLACED

In general, ride in clothes you feel comfortable in.  In an earlier post I included a photo of me riding Prim on the trail.  I think it was taken for the paperback edition of The Beginning Dressage Book (published by Lyons Press in 2003), and I was supposed to look neatly turned-out, as though I were competing in a schooling show.  But except for the white button-down shirt, the rest of what I’m wearing would not be out of place on a trail ride, since I use my old Passier dressage saddle and often wear my tall boots.  (Have I mentioned I’m a leather boot fanatic?)