For horses, eating is a serious business—so serious that in the wild, when they’re not sleeping, they’re eating.  Eating is even more serious for domesticated horses, because they’re usually fed by the whim of those who own or train them, and not according to their own instincts.  Once your horse has finished breakfast, he starts waiting for dinner.  It’s usually a good idea to let them eat in peace.  It’s also a good idea to feed them three times a day. 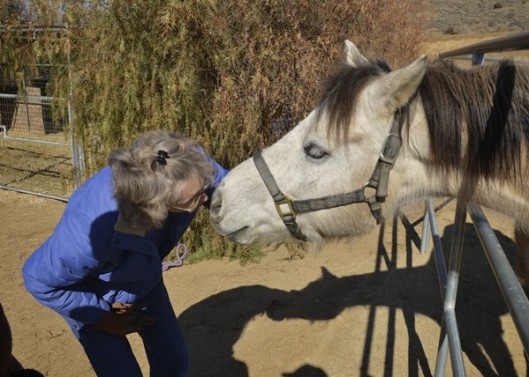 Because of the shape of Gunsmoke’s head, it’s also hard to find halters to fit. (Photo by Charles Hood)

I had never paid much attention to a horse’s eating patterns when I only had Prim (before Gunsmoke, in other words) except to note that if I did feed a midday meal—and most veterinarians and equine nutritionists prefer you to feed three small meals a day rather than two large ones.  Their reasoning is that such a horse has something in his stomach at all times, which will keep his gut happy.  But Prim didn’t seem too interested in a noon meal, so after a couple of weeks I stopped doing it.  (Grass hay is your best bet because it will keep your horse happy and his digestive track healthy—it’s high in fiber and low in protein.)  But I also learned that Prim didn’t like me to put her fly mask on while she was eating.  She took this behavior to such extremes that I often spent five minutes following her, treats in one hand and a fly mask in the other.   Every time she passed her feeder she’d snatch a mouthful of hay.  Because I’m not really awake first thing in the morning—which is when I feed—it took me a lot longer than it should have to figure out that if I put her fly mask on before I fed, life was a lot easier for us both.

When I brought Gunsmoke home, he gained weight fairly rapidly, even though he and Prim shared a 24’ x 24’ pipe corral.  Prim was clearly the boss, and would drive him away from “her” hay with her ears flat and her teeth bared.  Gunsmoke and the mare he had been stabled with (both by the same sire) belonged to a man who didn’t live on the property, and apparently didn’t notice their skeletons were protruding so obviously under their skin he could have hung clothes on them.  It took me about a year of owning Gunsmoke to realize that while he was in much better health—he was even growing a mane—Prim was losing weight.  She wasn’t accustomed to having a stable mate.  Gunner was, and as soon as he finished his hay, he ate hers.  If she wasn’t interested in eating at the moment, she would let him.

Gunner objected to anything that came between him and eating, and I learned to work him in the afternoon and then lead him back to the corral and not feed him until the evening.  During winter’s short days, this was a challenge.  But I didn’t want him to associate the end of a work session with food.  It didn’t make sense to reward him for dragging me back to his corral.  We finally had to separate the two horses by dividing their big corral in half, using the same pipe-and-wire-mesh construction as the original.

When the days finally grew longer again and the flies came back, I thought that putting a fly mask on him was going to be an ordeal, given his history, even though I fastened it before I fed either one of them.  But getting it on him wasn’t the challenge.  The Velcro fastener was the challenge, because he has these dinner-plate Quarter Horse jaws.  If the mask is snug enough to keep the flies away, it won’t fasten over his jaws.  If it’s big enough to fit over his jaws, it’s too loose around the noseband.  I’m still looking for a brand and size of fly mask that takes “Quarter Horse jaws” into consideration.

If you have just bought or rescued a horse, it’s smart idea to stay away from him while he’s eating, at least for the first week or two.  First, see if he’ll allow you in his corral or stall while he’s eating so you can clean up after him.  Keep an eye on his ears and his back end.  If he pins his ears and bares his teeth, walk out the gate.  If he doesn’t mind your presence, clean while he’s eating.  Some horses are real mischief-makers.  If you try to clean when they’re not eating, they will try to “help” you, usually by chewing on one of the handles of your wheelbarrow and, as soon as it’s full, turning it completely over.  (I just described Gunner.)  If you have to clean around his legs, let him know where you are.  Most horses won’t mind.   But most horses will let you put a fly mask on while they’re eating, too.  Like snowflakes, every horse is one of a kind. 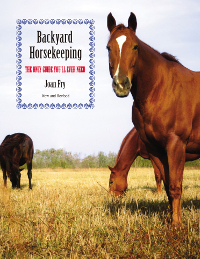 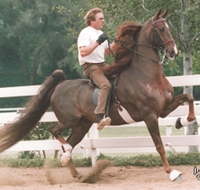